If you need to hire a criminal appeal lawyer to launch an appeal of a criminal court decision or you are responding to an appeal launched by the crown attorney, call Daniel Brown Law right away.

The criminal appeal lawyers working at Daniel Brown Law have argued hundreds of appeals in Ontario and can help you appeal any criminal offence to get your conviction or harsh sentence overturned.* Our firm can also help you suspend any ancillary orders such as a judicial suspension of your driver’s license or probation while you await the outcome of your appeal.

More significantly, the lawyers at Daniel Brown Law have extensive experience with applications for bail pending appeal, ensuring that you do not unnecessarily spend time in jail while you wait months or years for your appeal to be decided in the appellate courts. 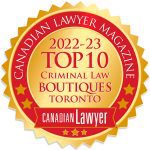 Our appellate practice, includes summary conviction appeals to the Superior Court of Justice, indictable appeals to the Ontario Court of Appeal, and appeals to the Supreme Court of Canada. Daniel Brown and our team of criminal appeal lawyers are often sought out by other defence lawyers who feel that their clients have been unjustly convicted at trial.

Daniel Brown is also frequently called upon by the media to provide commentary on significant Canadian appellate decisions:

Whatever your appellate needs, the appellate lawyers at Daniel Brown Law can assist you with your attempt to get a second chance before the justice system. The law places strict time limits on the filing of most types of appeals (often 30 days or less) so you are urged to arrange an appointment with our appeal team as soon as possible after a conviction. Please continue reading below for further information on appealing a criminal conviction or appealing a jail sentence in Toronto, Ontario.

This article provides legal information about criminal appeals for conviction and sentence in Toronto, Ontario. It is not intended to be used as a substitute for proper legal advice. If you are looking for specific information Crown initiated appeals, please read: How to Defend Against an Appeal Initiated by the Crown Attorney. Those looking for legal advice on the time limits or process of filing an appeal with the court should consult a criminal lawyer.

In a nutshell, an appeal is a review by a higher court to determine the correctness of what happened at the trial and whether the trial was conducted fairly. Usually, appeals are based on the judge at the trial making a mistake in how he or she applied the law to the facts of the case. However, in some circumstance, an appeal can also be used to review whether the judge properly considered the evidence put forward at trial or whether the evidence was sufficient to support a conviction. Some appeals can also be argued on the basis of poor legal representation at trial. An appeal can be brought against a conviction or sentence.

A summary conviction appeal is a review of a decision of a provincial court judge where the Crown has made the decision to proceed by way of a summary trial or the Criminal Code requires that trial proceed summarily. The Crown will often choose to proceed summarily where the case is less serious or they are seeking a lower penalty at the end of the trial (such as impaired driving or domestic assault charges). For most summary conviction cases, the maximum penalty is six months in jail (some offences have a maximum sentence of 18 months in jail).

For more serious matters, the Crown may choose to proceed by Indictment or the Criminal Code may require the offence proceed by way of Indictment (for instance, murder, robbery or kidnapping). In Ontario, these appeals take place at the Court of Appeal for Ontario in Toronto regardless of where in the province the trial took place. Appeals to the Ontario Court of Appeal are heard before a panel of three judges.

For both summary conviction appeals and indictable appeal you can start an appeal after you have been convicted. Appeals have strict time limits. The time limit is normally 30 days from the date on which you are sentenced. For many summary conviction matters or guilty pleas, the conviction and sentence happens on the same day. It is possible to bring an appeal outside the 30 day period, however, you have to seek special permission from the appeal court.

1) There is a possibility that the appeal will be successful;

2) It is not contrary to the public interest that the person be released pending appeal (this a very significant factor for offences that result in a long jail sentence); and

3) That the person will surrender themselves on or before the date of the hearing.

Preparing a proper “bail pending appeal” application may take several weeks. Therefore, it is important to begin preparing this type of motion as soon as possible after the conviction is registered by the judge rather than waiting for the sentence to be imposed. For more information, read: Obtaining Bail Pending Appeal in Criminal Cases.

It is also possible to have ancillary court orders imposed as part of the sentencing be suspended pending the determination of the appeal; for instance, the mandatory year long driving prohibition on convictions for impaired driving. Fines, restitution, forfeiture of property or probation orders can also be suspended pending appeal. Like a bail pending appeal, this requires a separate motion before the Court that will hear the appeal.

An appeal is not a re-trial of the case. The evidence that was heard at trial is often not in dispute. All the evidence heard by the witnesses at trial (transcripts of testimony) and any physical evidence entered at trial (exhibits) are reproduced for the appeal court. The issue on appeal is whether the judge applied the law properly and arrived at a decision he or she was entitled to make. An appeal court does not under normal circumstances hear witnesses or receive any new evidence. The appeal court will also generally not interfere with a judge’s findings of credibility (i.e. whether the trial judge believed or did not believe a witness). The court process consists of the lawyers making legal arguments (submissions) as to whether the decision of the judge at trial was correct in how he applied the law to the evidence before him.

The “factum” is a fancy name for a document that briefly outlines the facts of a case and the legal arguments that are going to be made during the hearing of the appeal. Most of the work done on appeals is done outside the courtroom. The appeal court requires that a full outline of all the arguments and the law that the parties are going to rely upon be prepared in advance of the hearing and filed with the court.

It is possible for the appeal court to hear new evidence on appeal (“fresh evidence”); however, the ability to put fresh evidence before the court is very limited. The appeal court can consider new evidence if it was not available at trial through the trial lawyer’s due diligence, it is significant and reliable evidence and it could have affected the verdict if it was before the trial court. Read Winning Your Appeal With Fresh Evidence for more information on the subject.

The costs to appeal will vary depending on whether it is a summary conviction appeal or an indictable appeal, the complexities of the legal issues and the length of the trial. For instance, appeals that require fresh evidence are often more expensive. There are also significant costs up front to pay for the transcripts of the trial.

Every word that is spoken in open court is recorded by a court reporter – whether it is evidence from witnesses or legal argument made by the lawyers. The appeal court requires copies of the transcripts be filed with the court to assist them in deciding the appeal.

For conviction appeals, usually the entire transcript of trial is required. In the case of sentence appeals, the court is prepared to decide the matter on less than a complete record, often supplemented by an agreed statement of facts between the defence and the Crown. This often results in less costs.

For indictable appeals, the cost of transcripts alone are $3.75 per page (for five copies) or approximately $500 – 600 for a full day of court time; thus a five day jury trial in superior court could cost $2500 to $3000 for the transcripts.

For summary conviction appeals, the transcripts are usually shorter but the cost per page is higher at $4.30 per page (for three copies).

If you, or someone you know requires assistance with a sentence appeal or conviction appeal, you should immediately contact a criminal lawyer as the clock may already be ticking on the appeal deadline. For a consultation, Daniel Brown can be reached at (416) 297-7200.

* Our lawyers have argued more than 275 criminal law appeals during their legal careers including Daniel Brown Law LLP and elsewhere in Ontario. Our lawyers’ past successes or results are not necessarily indicative of future results. Outcomes will vary according to the facts and merits of each individual case.