Milton Criminal Lawyers, Daniel Brown, represents clients charged with serious indictable and summary offence matters in the Superior Court of Justice and the Ontario Court of Justice in Milton and throughout Halton Region and most of southern Ontario. 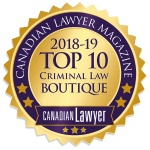 Our results speak for themselves. Daniel Brown Law is recognized by Canadian Lawyer Magazine as one of Canada’s top 10 criminal defence firms.

Criminal matters in Milton, Oakville, Burlington, Halton Hills and elsewhere in Halton Region are heard primarily at the Milton courthouse on Steeles Avenue East in Milton:

In Milton, criminal matters (except  drug charges)  for anyone charged as an adult (over 18 years) takes place virtually over Zoom in Courtroom #1 beginning at 9:00am on Mondays -Wednesdays.

Those facing domestic related charges including domestic assault, mischief under $5000, criminal harassment, uttering threats etc will appear on Thursday morning before a judge in Courtroom #1 between 9:00a.m. and 1:00pm.

If you are young person (under 18 years old) charged with a criminal offence in Halton Region, you are required to virtually appear in a special Youth Court on Thursday afternoon in Courtroom #1, starting at 2:00 p.m..

If you are facing a drug chrge in milton or elsewhere in Halton Region, you are required to virtually appear in Drug Court on on Friday mornings beginning at 9:00 a.m. in Courtroom #1.