Daniel Brown Law is a criminal defence firm experienced in representing clients charged with serious matters in the Superior Court of Justice and the Ontario Court of Justice in Newmarket and throughout York Region and most of southern Ontario. 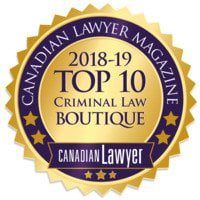 Our results speak for themselves. Daniel Brown Law is recognized by Canadian Lawyer Magazine as one of Canada’s top 10 criminal defence firms.

Having an experienced Newmarket criminal lawyer on your side is the best defence. It is the only way to help you achieve the best possible results when facing criminal charges.

Daniel Brown is one of just a handful of lawyers in York Region designated as a Criminal Law Specialist. He regularly defends people charged with crimes in Newmarket, Vaughan, Thornhill, Markham, Richmond Hill, Woodbridge and elsewhere in York Region.

The criminal defence lawyers at Daniel Brown Law are available to work with and along side you through every stage of the criminal court process including bail hearings, trials and appeals for all types of criminal charges.

With extensive knowledge of the law and criminal court procedure at the Newmarket courthouse, our firm can assist in a number of criminal law related areas.

Click on the links below to learn more about some of the charges Daniel Brown Law defends:

If you are an adult (over the age of 18 years) charged with a criminal offence other than a “domestic” related charge (including domestic assault) in York Region, you are required to make your first appearance in Courtroom 201 at the virtually using Zoom or by calling in by telephone. Virtual set-date court  is held takes place on Tuesday through Friday beginning at 9:00am.

In the virtual court, you or your lawyer will be able to update the court on your progress in the case, request dislcosure and schedule court hearings including  judicial pre-trials,  preliminary hearings or a trials.

Those facing domestic related charges including domestic assault, mischief under $5000, criminal harassment, uttering threats or sexual assault etc will appear on Tuesday or Wednesday morning before a judge in courtroom 102 at 9:30a.m. until a trial date is scheduled.

If you are young person (under 18 years old) charged with a criminal offence in York Region, you are required to virtually appear in a special Youth Court on Thursday courtroom #102, starting at 9:30 a.m.

Standing Agent for the Public Prosecution Service of Canada: [email protected] or call 416-428-2705.

If you are not released from the police station and are in custody you will be required to make an appearance in bail court within 24 hours of your arrest. Bail hearings are typically held virtually before a justice of the peace starting at 9:30 a.m.

If you or someone you know has been charged with a criminal offense in the Newmarket area, do not delay seeking legal representation. Contact Newmarket criminal lawyers, Daniel Brown Law at (416) 297-7200 to arrange a consultation to discuss your criminal matter.