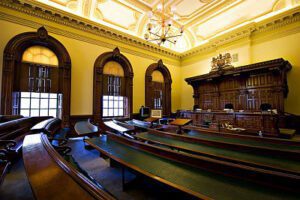 This article provides legal information about defending a criminal appeal initiated by the Crown Attorney in Ontario of either an acquittal or sentence. It is not intended to be used as a substitute for proper legal advice. Those looking for legal advice on the time limits or process of filing an appeal with the court should consult a criminal lawyer. Call Daniel Brown to discuss your criminal appeal matter at (416) 297-7200.

The Crown (Attorney General) has the right to appeal both an acquittal (not guilty verdict) and sentence. The Attorney General only appeals a limited number of cases each year and each potential appeal is subject to a review process that is triggered by a request from the local Crown Attorney who prosecuted the case. If the Crown does decide to appeal, you will receive a notice of appeal that will be served on you personally, typically by the police. The notice of appeal will briefly set out the errors alleged by the Crown that form the basis for their appeal. To learn about appeals initiated by the defence, read How to Appeal a Criminal Conviction or Sentence.

Powers of the Crown to appeal

The Crown can only launch an appeal in limited circumstances set out in the Criminal Code. A Crown appeal can only involve “a question of law”; in other words, the Crown is prevented from bring appeals that involves only factual issues, like whether the trial judge was right to believe a certain witness’ evidence.

Because of the limitation put on the Crown through the Criminal Code and their internal review process, the Crown rarely appeals. The Appeals they do initiate are usually ones that have a significant public interest and also have a good chance of success. That is why it is imperative to seek legal assistance.

Crown appeals are subject to the same process and limitation periods as any other appeal. The Crown must serve you with the notice of appeal within 30 days from the acquittal or sentence, depending on what order they are appealing. While it is possible for the Crown to get a special order from the Appeal Court extending the time period in which to appeal, this is extremely rare. The chances are very good that if 30 days has passed since your acquittal or sentence, the Crown has opted against bring an appeal. If the Crown does appeal, it is up to them to order the necessary transcripts, draft a factum and prepare an appeal book. This material will be served on you or your lawyer at some later time. Your acquittal or sentence only changes if the Crown is successful on their appeal.

What can the Court of Appeal do if the Crown appeal is successful?

If the Crown has appealed conviction, the Appeal Court may order you back to have another trial on the same charges or they may substitute a conviction and proceed to sentence you. If the Crown successfully appeals sentence, the Appeal Court may increase the length of the sentence or change the structure of the sentence (for instance, they may order the remainder of a conditional sentence to be served in jail).

What to do if you receive a Notice of Appeal

The most important thing to remember is do not panic. Even though Crown appeals are rare, as an appellant the Crown often faces an uphill battle to convince an appeal court to overturn an acquittal imposed by another judge or by a jury, or the sentence. With an experienced lawyer assisting you to respond to a Crown Appeal, your chances drastically increase that the Court will choose not to interfere and dismiss the appeal.

If you, or someone you know requires assistance with a Crown initiated sentence appeal or appeal of an acquittal, you should immediately contact a lawyer as the clock may already be ticking on the appeal deadline. For a consultation, Daniel Brown can be reached at (416) 297-7200.